About The 40+ Stage Company

The 40+ Stage Company came into being March, 2016 during lunch between Gene Johnson, a well-known actor and director who resides in Winston-Salem, and John J. Hohn, a retired businessman also of Winston-Salem. Both were aware that roles were seldom offered to experienced but older actors. Directors favored youth. Thus the idea of a company that admitted mature actors and focused on developing performance opportunities for them. An initial investment of $500 prompted Johnson to file non-profit status and draft all the documents necessary for incorporation.

Plans came together in the late summer of that year. The board held its first meeting. Hohn was elected chair. Johnson assumed the position of Artistic Director. The Childers’s Group of Merrill Lynch came forward as the first season sponsor. Hanesbrand and Mountcastle Forum were chosen for the venue. 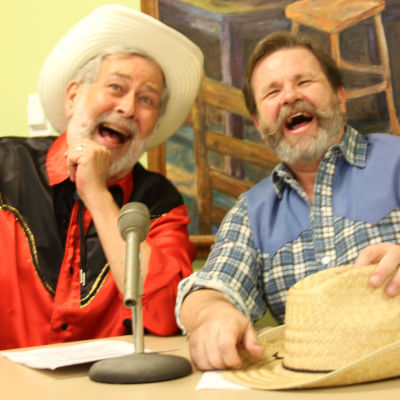 The company opened the 2017, opening with Greater Tuna, followed by a musical revue, Showtune, and ended the season with The Sunshine Boys.  The Childers’ Group signed on as a season sponsor for our second season and were joined by Blacno-Tackabery Attorneys. The board now includes twelve members.

The company mission expanded under the influence of board member Lee Covington, CEO Senior Services of Winston-Salem and Forsyth County, who proposed using company resources to create a multi-media anthology of histories of long-time Forsyth County residents. An outreach program was thus established through which classes in acting would be offered through Senior Services and local residence communities. The classes sought to enroll aging adults as research established that continuing a creative lifestyle into the later years has a beneficial effect on physical and psychological health and general well-being. The company was awarded an Arts Council grant in support of its outreach efforts.

The Company opened the 2018 season with Driving Miss Daisy which was very well received by audiences. The comedy Hot Flashes followed. The British comedy Staircase was presented in September in what appears to be slated annual early fall performance date. The season closed with Showtune Holiday Version, a musical revue featuring holiday selections drawn from movies and the Broadway stage.

The Company is proud to be designated a resident theater company of the Milton Rhodes Center for the Arts. The Arts Council of Winston-Salem has been very supportive in launching our first two season and awarded a sponsorship grant in 2018. The Company is indebted as well to its season sponsors: The Blanco-Tackabery Law Firm, Winston-Salem, and the Childers Group, Merrill Lynch and Bank of America, Winston-Salem.

Going forward the Company is committed to creating performances opportunities in the classroom and on stage for theater enthusiasts in mid-life and beyond. Play selection will be guided by a focus on the issues and concerns of this aging group in the population. Open auditions will be announced on this web site and on Facebook. Volunteers are invited to join our fellowship and help with the production and administration. Classes will be announced from periodically on this web site, our newsletter, and other media sources.